I was looking forward to last weekend as i had a GREAT one planned. I had booked Saturday night off work a few weeks back and was planning to travel down south for a great WAB wargame based on the Macbeth play hosted by Dave "shami" Marks and Sunday i was hosting a LotOW game with Colin to playtest the rules for "Pinkertonmen" posse i have been working on.

Saturday was a no go when work decided that i hadnt given them enough notice and couldnt authorise my absence. So unless i went AWOL the Norwegian contingent i was hoping to lead into battle would have to count as lost at sea. 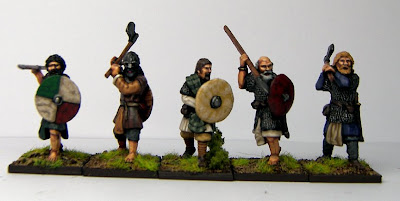 I would of loved to have been there, but it was not the end of the world, As i knew that Sundays game was going to be great fun.
So after finishing work at 0230 Saturday night/ Sunday morning i decided to put in a few extra hours at my painting station to get a more townsfolk painted up for the coming game.
I finally put my head down at 0500 only to be woken up two hours later by my 3 year old daughter. Even this i didnt mind as i could sit her down after breakfast painting stones whilst i finished off my townies, and prepared myself for the forthcoming shoot out.
But it was not meant to be as i received a message from Colin who was unable to make it due to his car breaking down (i was beginning to worry that i smelt like a wargamer).

Colins car...........
All being well, Colin and I will get a game or 2 in next weekend and i will be able to test out the pinks and post some great pics and a battle report from the mean streets of Imelda
Posted by Steve h at 13:40