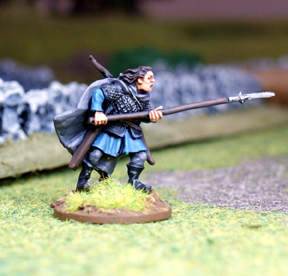 The Rangers of the Grey Company dressed in dark grey cloaks and wore a silver brooch shaped like a pointed star during the War of the ring. They armed with spears and bows.
Like their distant cousins, the Rangers of Ithilien, the Rangers of the North spoke sindarin in preference to the common tongue. They were led by a Chieftain, whose ancestry could be traced back to Elendil and beyond, to the ancient Kings of Numenor.
During the War of the Ring the Rangers of the North were led by Aragorn, but the northern Dúnedain were a dwindling and widely scattered folk. When Halbarad received a message to gather as many of the Rangers as he could find then lead them south to Aragorn’s aid, only thirty men (the Grey Company) were available at short notice for the journey. The Grey Company met up with Aragorn, Legolas, and Gimli at the Fords of Isen in Rohan, and at Pelargir, along with the Dead Men of Dunharrow, they captured the ships of Umbar. The Dead Men then departed and the others continued on to fight in the Battle of the Pelennor Fields. There, Halbarad was killed. They also fought with Aragorn at the Battle of Morannon.

Well only 30 showed up for Aragorn, but theres 48 here!!
just Halbarad to do to complete these guys ;o)

Email ThisBlogThis!Share to TwitterShare to FacebookShare to Pinterest
Labels: games workshop, lord of the ring, war of the ring