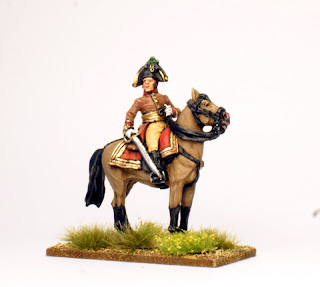 Josef, Freiherr Von Smola, Austria's greatest artillery commander during the Napoleonic wars. Smola was in the forefront of aggressive use of cavalry batteries. Widely recognised for his ability to inspire men to extraordinary eforts.
in 1787 he graduated from bombardier school as the star pupil. He was then awarded the rank of Oberleutnant and became an instructor. After having fought in the Turkish war he went to the Netherlands as a battery commander in the First Coalition war. 1793, when serving in the advance guard. Smola's battery plus two 3pdrs blocked Miranda's French division for several hours. Eventually forced to fall back, Smola added ten 12pdrs, two 3pdrs and two howitzers to his command, this fire power managed to put the French to flight. His horse battery then joined the counter attack. His decisive actions earned him the Maria Theresia Order.
In 1809 Smola was artillery director in III korps, distinguishing himself around Regensberg, for which he was promoted to Oberst. As interim HQ Artillery Director, he directed the guns which broke the French assaults at Aspern, before establishing a 192 gun battery which pounded the enemy positions in the closing phase of the battle. Smola also led the artillery at Wagram.
In 1813 he was promoted to GeneralMajor and appointed to artillery director in Italy.
In 1815 he fought in Franc and was promoted to Feldmarschalleutnant and ennobled to Freiharr Von Smola.


Not a bad career for a gunner. The Austrian command always seems to get a bad rep in our wargames. This chap goes to show that there was some good ones out there in the mud. So I hope I have done him justice.