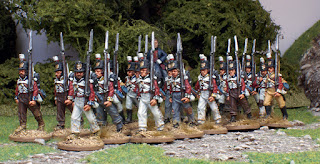 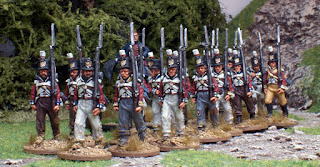 Sometimes a range comes out that makes you feel as excited as a fat kid in the queue at Krispy Kremes. This is it for me but with fewer calories. Luckily for me a got to paint these my business, next i'll be painting some for plain old fun!
At the weekend I will be researching for an interesting OOB circa 1810, to give me a nice mix of battalions and a regiment of light dragoons wearing the tarleton! To face these I will be planning on finishing off my Confederation of the Rhine regiments backed up with some French combined grenadier battalions and light infantry. 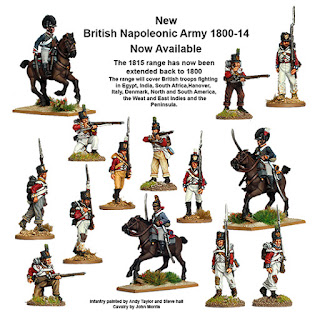 This range is being extended back to 1800. The codes up to BH 67 have been designed for the Waterloo campaign, but can be used prior to that particular campaign. These include Highlanders, Riflemen, Light Infantry, Light Dragoons, Royal Horse Artillery and named Staff officers.
The extended range will encompass the British troops who served in Egypt, India, South Africa, Denmark, Hanover, Italy, North and South America, the West and East Indies as well as the Peninsula.
Remember the plastic British Infantry (BH1) and Hussar set (BH 80) cover the whole 1808-15 period, whereas the plastic Light Dragoon set (BH 90) covers the entire period.
There will be a separate range for the auxillaries who fought alongside the British during the early period.
Posted by Steve h at 10:39