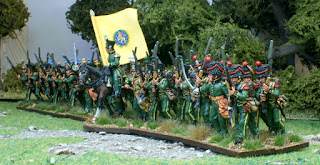 The second battalion of the 2nd Nassau Usingen regiment were one of the first units to make contact with the French in the 100 days campaign. At the village of Frasnes just before 6pm on the 15th of June 1815, a lone horseman was seen approaching their position. He turned out to be a trooper belonging to the Prussian 4th (1st Silesian) Hussars, who was separated from his regiment during their retreat from Gosselies. He was unarmed, covered in wounds and blood. He told Captain Wirths of the Nassau Usingen regiment, that the French would probably break through to where the battalions picquet was standing very soon.

Not long after parties of Uhlans were seen approaching, they failed to satisfy the challenge of the sentries and were peppered with musket shots from the marksmen, hidden behind hedges and walls. 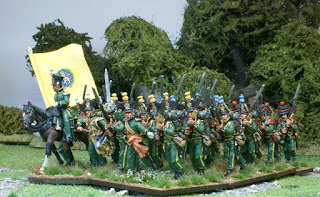 A combat ensued and with the help of a battery of guns the Uhlans were kept at bay for a while. After around half an hour of fighting the Nassauers were still holding their own against the lancers of the Imperial Gaurd. They still had some men in the village, the main body of the battalion was on the heights, with the gun battery overlooking Frasnes. 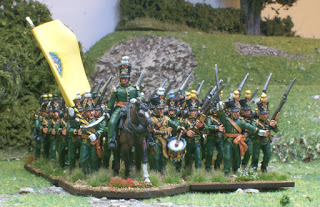 Before long however it looked like the main body of the lancers were preparing to bypass the village altogether, across open fields to the west of the Charleroi road. As they closed The Uhlans were pushed back with heavy losses by musketry and canister from the heights.

Fearful of being cut off by a flanking movement Major Von Normann decided it was time to pull back to where the remainder of the brigade were hopefully taken up positions at Les Quatre Bras.
As they were withdrawing the French made an impetuous charge, which was stopped in its tracks by more canister. 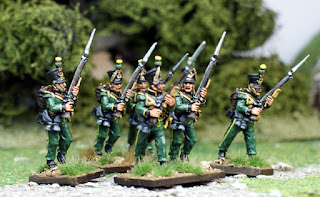 As they retreated towards Quatre Bras, the artillery remained on the road with the battalion in two halves on both sides of the road, which was in a deep cutting. They marched in closed columns harassed by swarms or guard lancers. The guard lancers encircled them and executed many charges which were repulsed by the battalion. The lost no men during the retreat, but 39 were killed, wounded or missing durinf the fight in Frasnes including Captain Von Muller,