weekend at the Perrys

Well its taken me along time to get around to posting this and I feel I have finally recovered from the experience.  The other weekend I popped to Nottingham for a weekend with Perrys and friends.
Lunch time Friday I met with the twins for a nice lunch in one of Englands oldest pubs dating back to 1189AD and set in to caves outside Nottingham castle. Later on we had some LAN gaming fun using Battlefield, with some 2 on 2 action. Followed by a few beers in the local.
Saturday morning Stuart , Simon and I were treated to a sculpting master class by the masters themselves, Alan and Michael Perry!  In which we learned many little tricks to help us to convert miniatures and up our game (some pics of what I managed to do soon).
Then on Saturday afternoon we popped to Michaels wargames room and met up with Aly Morrison, Dave Andrews and rick Priestly for a game of Hail Caesar.


The scenario was a fictitious battle where the Lancastrian English crossed the channel to teach the Burgundians a lesson for supporting the Yorkists.
The English troops were supplied by Michael Perry, the Burgundians by Simon Chick and Dave Andrews. My Italian force had been left behind in the boot of my car :(

The overall battle plan for the Burgundians was for the centre to hold whilst the two flanks with most of the heavy cavalry charged forward to push the English back to the port. I was playing the overall commander in the centre and after as few turns of patiently waiting for the flanks to engage (bad dice rolls were slowing down the advance) and now coming under a withering hail from the English longbowmen, I sounded the advance and charged forward with my infantry. This started off well routing 2 units of Michaels bill and bows. Sadly was the grind started i started to suffer to many casualties, this along with the losses due to the longbows as I advanced saw off my attack and the Burgundian centre began to collapse.

At the same time the Burgundian heavy horse on the right flank charged up hill at the well deployed English. The English could not halt the charge and they began to fall back pursued by the victorious knights. the Burgundian infantry led by Stuart began to advance and after a protracted fight took the farm to start to press the English left. 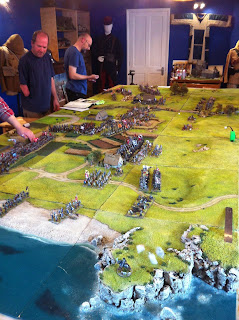 On the Burgundian left flank a see saw battle ensued with both sides cavalry repeatedly charging but neither side getting the upper hand. 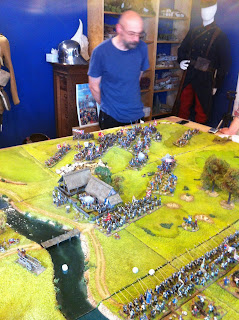 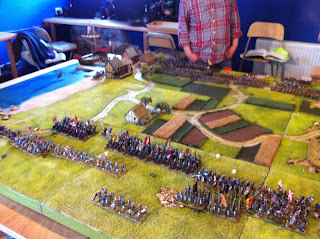 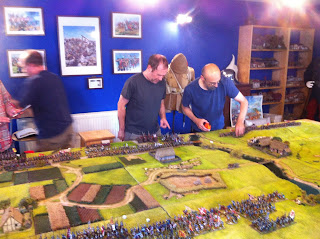 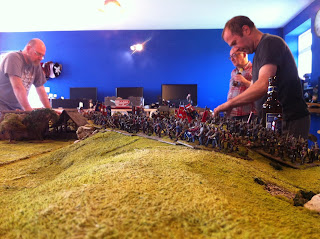 So as the sun began to set it was decided to call it a draw. the Burgundian centre was broken but so was the English left wing, leaving the Burgundian right free to start to roll up the line. 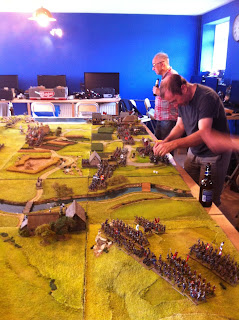 A fantastic days gaming with beautiful models on beautiful terrain with great gamers!
Followed rightly by a nice curry and a few beers!!

Sunday we got a sneak peek of something else quite amazing, photos to follow in a few months ;0)
Posted by Steve h at 23:08