the wind of Valdez preview

Here are a few pics of Pats' bandito posse "The wind of Valdez" .
I think you will have to agree they are some 'ard looking hombres,
fantastic paint job Pat.
Here's what he has to say about his posse..... 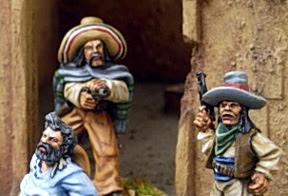 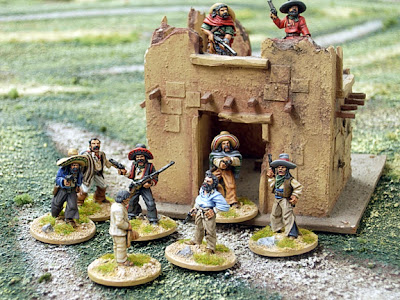 Valdez and his Merry Men.
They took from the rich and gave to the poor.

Valdez was a bandido to the gringo's but a hero to his suffering people. Times were hard so he took his merry men across the border to find money and gold to bring back to his village. He also wanted to punish the Long knives and Lawmen as he had a burning hatred for authority.
Valdez had sympathy for the Redskins as he felt they were a people similar to his own who had fallen on hard times because of the gringo's.
Outlaws, even if they were gringo's he would tolerate as they shared the same enemy, as long as they didn't double cross Valdez and his Merry Merry men.

They were making camp for the night when one of his merry men called out to his leader
"Hey! Valdez, how many sheets you want on your bed?" Valdez stood, pulled up his green tights, walked over and looked him straight in the eye and said.......
"You sheet on my bed and I kill you".
V.
Posted by Steve h at 17:14