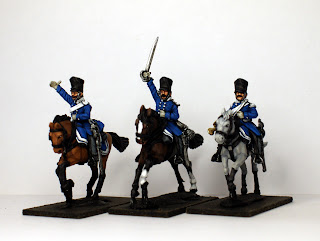 a WIP shot of my command figures for the 2nd Dragoons. part of the 1st cavalry brigade, I corp during the 100 days. The 2nd dragoons were heavily involved at Ligny, holding off the French on the final stages. They also clashed with the Dragoons of the Imperial Guard near the Bois de Fleurus.
figures are perry miniatures.