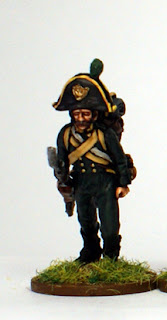 The third battalion 4th regiment Confederation of the Rhine was designated as light infantry and comprised of troops from the states of Saxe-Weimar and Saxe-Hildburghausen. The third rank were armed with rifles. These Perry miniatures are a real joy to paint, the dark green Prussian cut uniform contrasts nicely with the buff belts. If you are in a rush to get them finished you could always go for the later black belts! 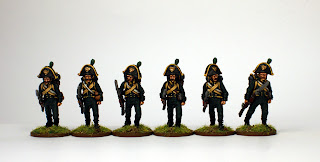