the last march of the Ents 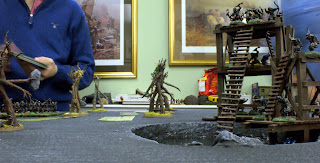 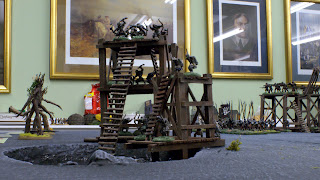 Last weekend a few of us met for a game of War of the ring. We played the last march of the Ents and were able to muster 19 of the shepherds of the forest.
Mick and I took the role of the woody ones, whilst Dave and Steve led the defence of Isengard and Sam umpired. We had a little addition to the rules which was event cards, we use these in quite a lot of our games and they come from the "war tokens" idea in Steves AB one games system. This time each side got one event card a turn, plus they could earn extra by answering riddles from the Hobbit book. Its been a good 20 years since i read The Hobbit, but i did finally manage to solve one...
The game was great fun and it was good to see how much damage the Ents could do to the massive units of Orcs, which looked intimidating but were quite squishy underfoot.
After hours of squishing Orcs in between eating buns, sausage rolls and wine gums ably supplied by Mick, We ran out of time just as Treebeard reached the dam. As far as I'm concerned it was a victory for good over evil, but Saruman may disagree.

Of note was an Ent who single handedly killed to trolls, that was fun eh Dave ;0)