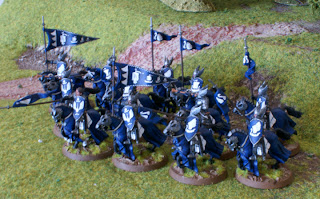 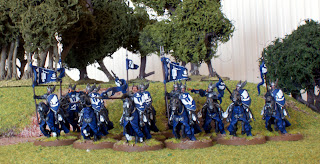 The Knights of Dol Amroth or The Swan Knights were a group of soldiers who served Prince Imrahil during the Third Age of Middle Earth. On March 9, 3019, Prince Imrahil led a company of Swan Knights to Minas Tirith to help defend the City. Prince Imrahil led the sortie that rode to the aid of Faramir and the rear-guard who were retreating from Osgiliath when the forces of Sauron overran the Pelennor Fields on March 13. Notable actions of the Knights during this battle included rescuing Faramir from the Southrons, and riding to the aid of the Rohirrim, fighting long and hard until the arrival of Aragorn.
These are GW plastics, great figures although the detail is lacking depth
Posted by Steve h at 11:26

Email ThisBlogThis!Share to TwitterShare to FacebookShare to Pinterest
Labels: games workshop, lord of the ring, war of the ring