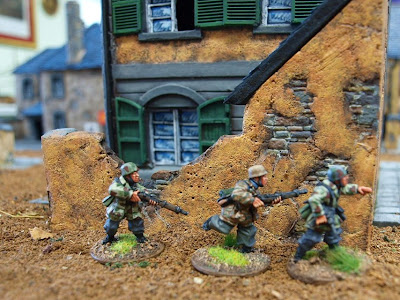 As the title says I actually managed to game this week!!
We played a game of "rules of engagement" WW2 skirmish rules by great escape games.
This was a new game for everybody and a few of the chaps who played were new to me to.
A good day was had by all, the rules seemed to work well, although slowed down by being newbies. I think after a couple of games the rules would flow well and there is lots of period chrome. HMGs are great and you wouldn't want to stand in front of them, so pretty realistic really ;o)
Posted by Steve h at 19:35