calm before the storm...

The Ugley boys are having trouble finding the time to get this one started....

So what we have decided to do is a one day event over the Christmas period to play out the campaign. Over the next few months i will start uploading the rules and lots of pretty pictures of the armies which have been created for the campaign.

I am simplifying the rules accordingly and will try to get them on this blog for your perusal shortly. We will be using the GW tile set which comes with mighty empires to represent England in 1066. With it now being a one day event i may well just use the might empires rules to, with a few modifications of my own..... (as you can probably tell by my babbling i am thinking this one through as i write). 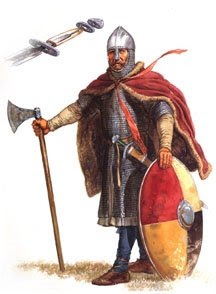 Wint Geoghan scratched with a blackened twig in the white ashes around the edge of the fire as the last of the sun's brightness faded over the western horizon. His brother Rich grunted , turning in his bedroll, Pat Kennedy snored and Stitch lay on his back staring silently into the sky's limitless depths.
It was not a happy camp up in the foothills of the Dark Peak. Wint seethed with bitterness and frustration, sucking at the taste of jack rabbit in his whiskers and sipping at a tin cup of Arbuckles. Losing Mike O'Neill had been a blow. Such a good man, hard as nails, he had deserved better. His brother would be arriving to learn bad news, but Brendan himself was a tough man.
It was not just a matter, now, of freeing Jimmy Mac before the fateful day, it was a matter of revenge. That Sheriff would be a pushover without those Pinkertons to back him up, but Pinkertons or no they were going to have their say pretty soon.
He settled uneasily down to drift off to sleep in thoughts of the impending clash and this affair's bloody resolution...The hanging was set for the second of September... in a few more days it would not be a blackened stick stirring ashes, but hot lead and cold steel stirring up all kinds of Hell in Imelda...
I hope that Wint has the date right. Was everything cleared with Imelda’s mayoress? 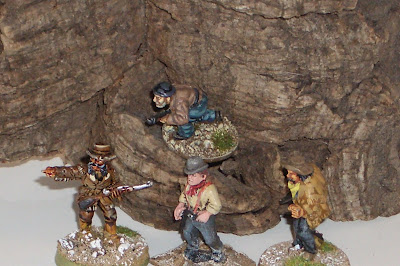 Monday broke clear and, rising fresh from a sound sleep, Wint Geoghan surveyed the landscape from a rocky promontory. The town of Imelda seemed to be asleep still, though he knew that folks would be up and about their morning chores. Later the place would bustle and maybe Pat Kennedy would make his way down for a look around... to see how things lay.
Stitch Schneider's visit on Saturday had revealed that the hanging had been postponed for a week, but he'd been pleased to report that the Sheriff's face still bore the marks left by Michael's fists, giving the lie to his cockiness.
Another week. Time for their anger to cool. Wint's eyes narrowed as he felt not a cooling, but a cold certainty crystallising behind them. He could keep his boys in check, soothe them like the cool touch of a gun barrel against their cheeks, but once the trigger was squeezed... they would boil up fast and whip like bullets into the town of Imelda. Wake it to living nightmare!


Patrick has been champing at the bit since our initial encounter in Imelda, he hopes to settle a score soon.
so watch this space!!
Posted by Steve h at 12:58 No comments: