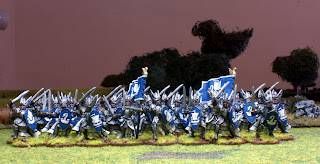 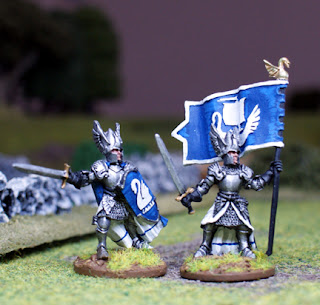 a massive war of the ring unit of foot knights of Dol Amroth. in old fashioned white metal non of that new fangled finecast resin here...
Posted by Steve h at 10:20 4 comments:

Email ThisBlogThis!Share to TwitterShare to FacebookShare to Pinterest
Labels: gondor, lord of the ring, war of the ring 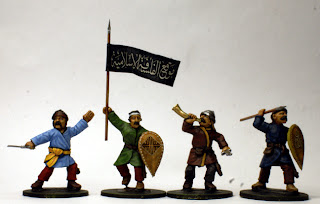 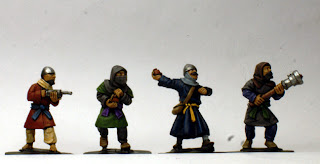 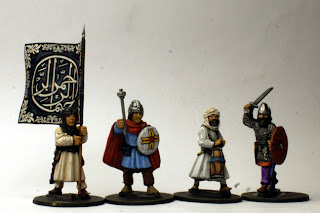 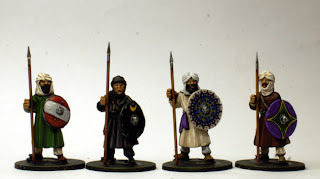 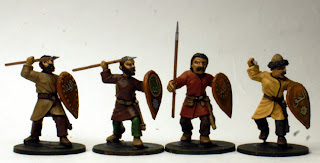 Here is a few pics of the rest of the infantry I have painted up for Gripping beast for their Armies of Islam range
And great fun the were to. Now I have them out of the way I can start concentrating on my own Crusaders collection :0)
Posted by Steve h at 14:31 3 comments: 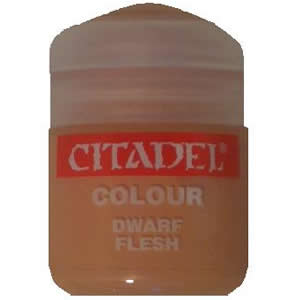 If you were as upset as I was when Games Workshop in all their wisdom removed this quality item from the shelves. Then your be pleased to know their is an alternative! 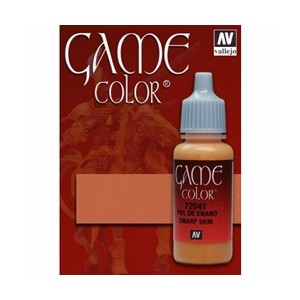 Any way i am well chuffed with finding this little gem.
For some it may look a little pink, but for me especially if I am doing drab tones it helps to make the skin tone pop, breathing life in to the miniature.

Email ThisBlogThis!Share to TwitterShare to FacebookShare to Pinterest
Labels: painting

THE BATTLE OF PARK FARM

My good friend John made the journey to Welsh border country last weekend, bringing along his steadily growing 28mm Napoleonic collection.
I played the British supported by a battalion of Prussians, whilst john commanded French and Poles.

This would be our second game of General de Brigade Deluxe, the last one being before Christmas, so we were both a bit rusty on the rules. 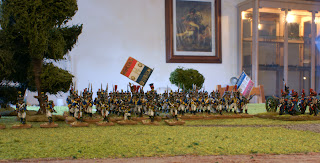 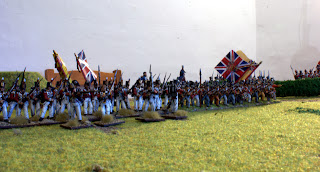 The scenario was that a battle had been raging for a few days and the French were outmanoeuvred and were looking for a weak spot to break out. To win John had to move at least 20% off his army off the road in my deployment zone. 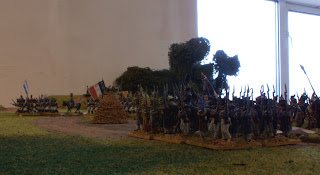 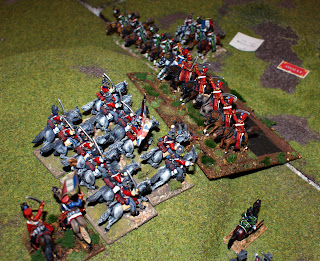 Without going into to much detail i will give you two highlights of a very fun game. My highlight was the Scots Greys charging down hill at the Hussars and with a double 6 roll on my BDDs (black dice of death) took their standard and kicked their butts! This eliminated the threat to my left flank in style. 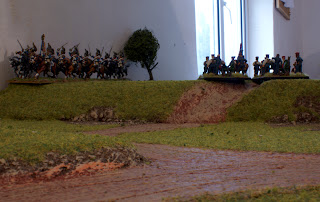 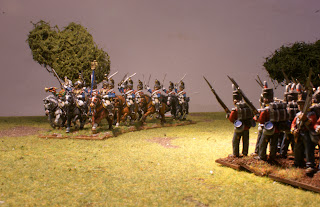 Whilst on the other flank an impetuous regiment of cuirassiers dodge past a nice big square to crash into a horse battery rolling over it and causing a brigade morale check which was failed.... 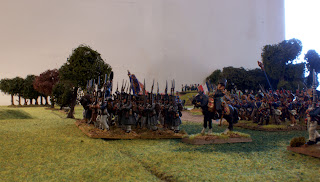 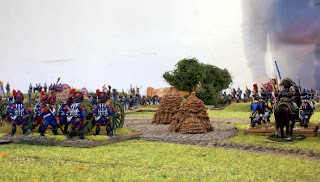 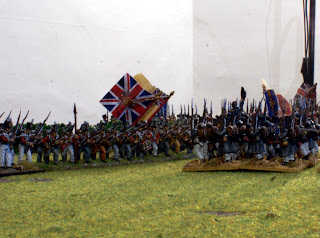 In the centre the British lines saw off the French column in the old fashioned way, faltering them, then charging in to finish them off.
All in all it was a great fun game and a fantastic first use of my wargames room.
Rules wise I felt once we were into it the rules worked excellently. For me the volley firing from the lines disrupting the squares had great period feel, but were not a guaranteed success, so led to fun drama.
With hindsight there were a few details we managed to get wrong but nothing that would of changed the game to much. Also I managed to pull off a win and a rather meek chilli....
A testament to a good game is it enthuses you,  John has since painted a battalion gun and is working on his rocket troop and I have bit the bullet and started ordering in my white horde of Austrians!
Posted by Steve h at 18:00 4 comments: 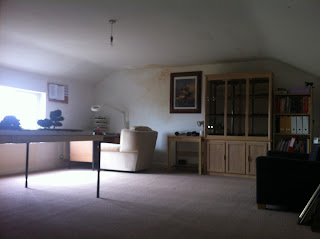 I'd like to think that my wargames room is finished, but like anything in wargaming it is never finished and can always be improved on.. 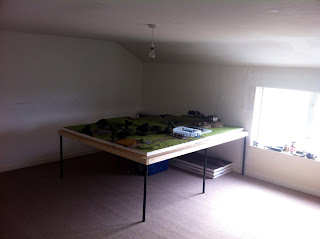 here is a pic of the table i've been making. It is 8'x6' with enough room to expand when the mrs isn't looking ;0) 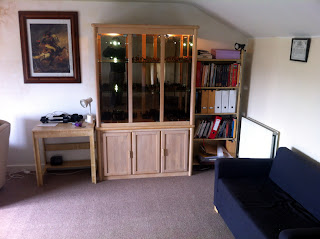 The display cabinet along with a bookcase full of rules and Osprey books, also a sofa bed in case the gaming goes on a bit longer than expected! 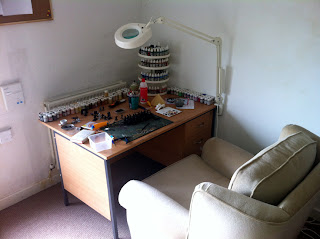 My painting desk, complete with comfy chair and daylight bulb. So no excuse not to crank out the minis!
All i need now is a few more pictures on the walls, some nicely painted armies and some friends!
Posted by Steve h at 13:56 11 comments:

Continuing on with the War of the ring theme, here are a group of 32 veterans. I will have a few historicals to show before the weekend followed by a massive unit of foot knights of Dol Amroth which i'm basing up right now.
Its my birthday on Friday and i'm hoping to treat myself to a new project, if I'm patient I may wait until Salute. But i'm not known for my patience.
Posted by Steve h at 17:05 4 comments: