Heres the latest unit of Campanians. Again they are Crusader miniatures, with the help of LBMS transfers. 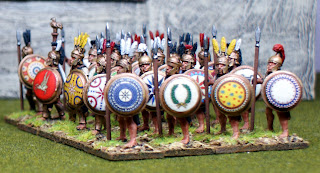 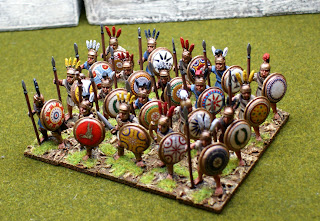 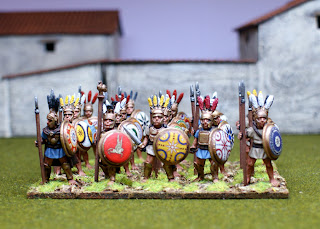 Whilst I had the camera set up I thought I would take a few pictures, I am really pleased with the results but i am sure they will only get better with time. I would just like to thank Joe Dever for his advice on the camera set up. Photography has never been my strong point and I really need to put some time aside to become proficient. But first some more commissions to finish! 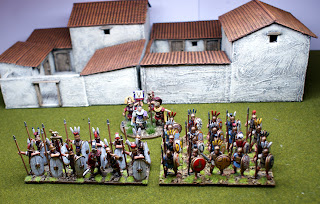 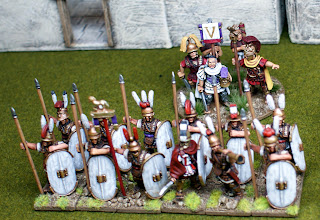 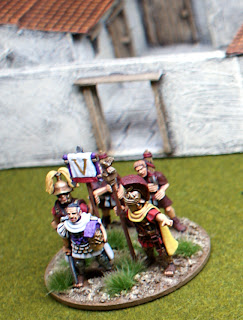 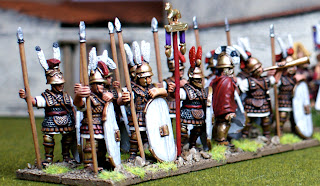 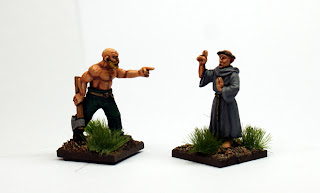 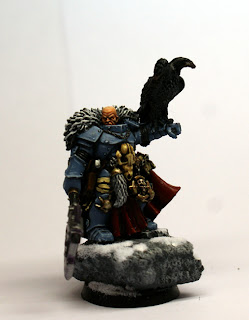 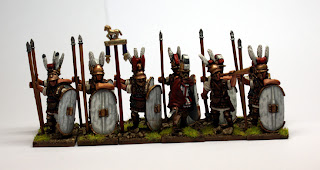 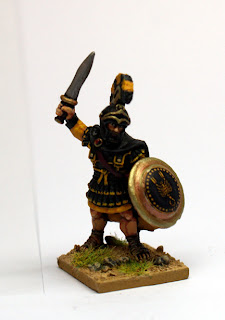 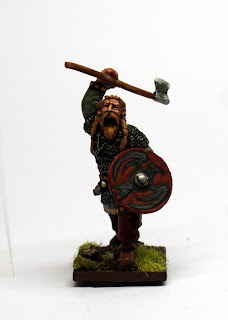 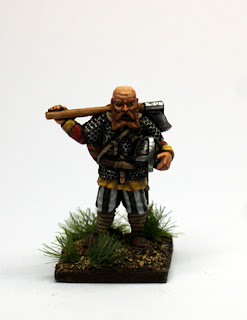 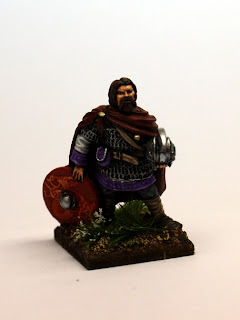 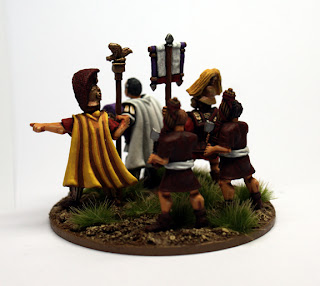 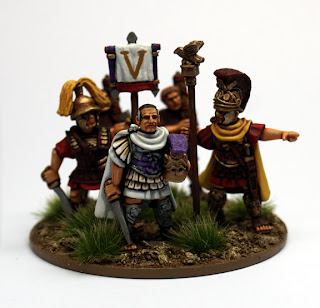 Well I finally bought the new camera I have been promising myself for the last couple of years... Its a Sony A350 and I had a little play with it this afternoon and I think once I get to know my way around it a bit better it will be a great camera for my needs.
Above are a few pics shot today, sadly there is nothing new. Next week I have lots to paint so stay tuned
Posted by Steve h at 22:08 4 comments:

If you like the building in the background of my latest couple of photos, Paul has a few more for sale.
Check them out on his website battlesinminiature.blogspot.com. I highly recommend them as great pieces to add atmosphere to your ancient gaming.
Posted by Steve h at 14:03 2 comments: 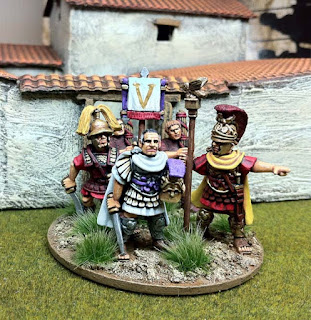 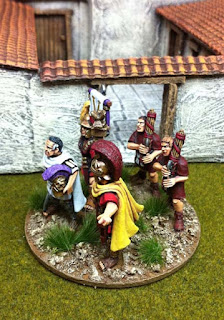 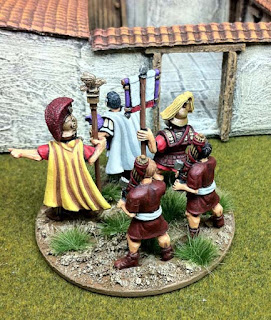 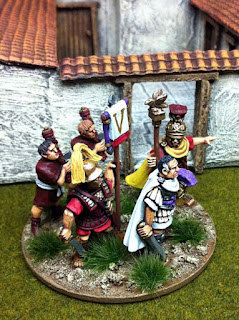 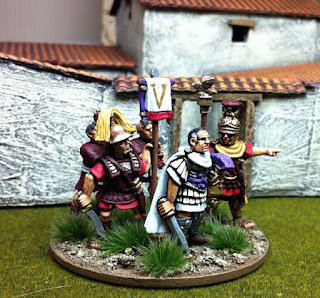 Here it is a finished at last! My General for my all to slowly growing Republican Roman army escorted by an Aquilifer, Vexillarius and to show he is the boss two Lictors. Lictors were members of a special class of civil servant, with special tasks of attending and guarding magistrates who held the right and power to command. essentially a bodyguard. The origin of the tradition goes back to the time when Rome was a kingdom, possibly acquired from the Etruscans. They carried axes which that symbolised the power to execute.
I really enjoyed painting these and think it shows in the vignette.
Thanks to Keith of Aventine miniatures for the following extra info on Lictors;

The degree of magistrate's imperium was symbolised by the number of lictors escorting him:
Sometimes, lictors were ascribed to private citizens in special occasions, like funerals or political reunions, as a show of respect by the city.
Posted by Steve h at 10:56 4 comments: 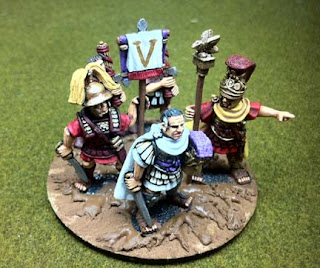 I managed to finish the vexillarius last night, you can probably tell by the not so great design on the banner that it was getting a bit late...
I may repaint it at some point or maybe buy LBMs transfer sheet for it. For now i just want to get them based up and finished, which will hopefully tonight.
Posted by Steve h at 17:28 5 comments: 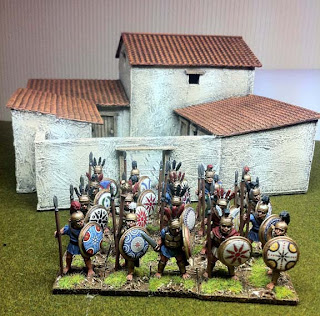 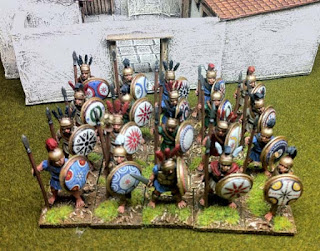 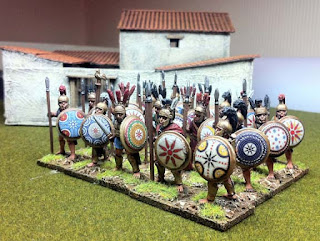 You will have to excuse the dodgy pictures as I have no camera at the moment and I am relegated to using my Iphone, but I just had to take a few shots of these Campanians before they head south. The figures are by Crusader miniatures and I have to say they are a joy to paint. I have to thank Steve from little big men studios for his advice on the shield transfers. They are ancient Italian designs for Gripping Beast shields and they fit well on the Crusader hoplons and really make the unit striking.
The building in the background was made for me by Paul Darnell and you can see more of his work here
I am now going to finish my extra standard bearer for the command stand before starting on the next unit of Campanians. I hope to get him finished tonight (thats if the Mrs will let me..)
Posted by Steve h at 21:15 3 comments: 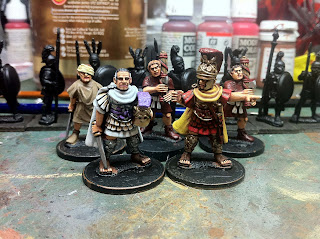 Just a quick update on the command, here are the finished figures but I have since decided to lose the armed slave and replace it with a vexillarius as I think this will look more fitting on the CnCs command base. If there is enough room on the base I may still add the slave. But before I can finish it off I first need to crack on with the Campanian Hoplites you can see in the background. I have 10 finished just another 30 to do...
Posted by Steve h at 13:29 2 comments: 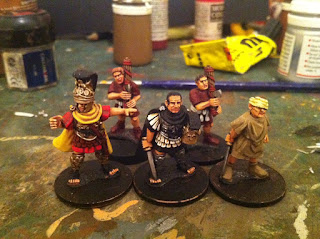 We moved house back in September and once everything was sorted i was able to start on my hobby room.
The hobby room is not yet totally how I want it but the good news is I have my desk and lighting good to go. Above you will find a WIP picture of the first figures I have painted since the move. These are now finished apart from the basing. They will be based on a large round base, i just can't decide whether to include the armed slave or swap it out for another standard bearer?
Now the room is functional expect a lot more productivity. On the desk at the mo are Punic cavalry and a large phalanx of Campanian spearmen.
Posted by Steve h at 18:41 5 comments: