March of the elephants part II 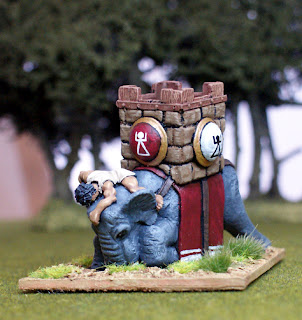 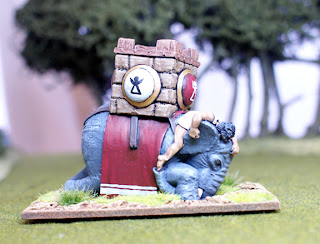 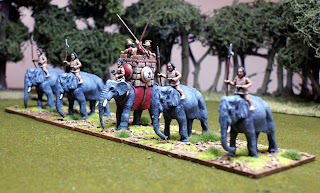 Some more elephants from Marches elephant painting frenzy. This time they are punic wars, the four without howdah are renegade miniatures. the other two are grippingbeast before and after contact with the enemy...
I do have another four sassanid elephants and a crusader Carthaginian one for myself to paint. But i need a break...
Posted by Steve h at 11:47 5 comments:

March of the ELEPHANTS part1 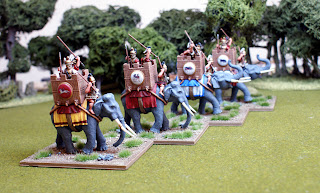 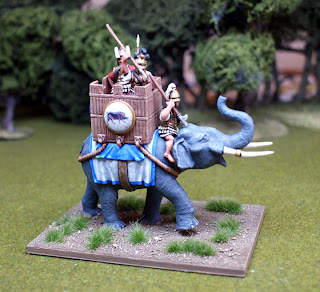 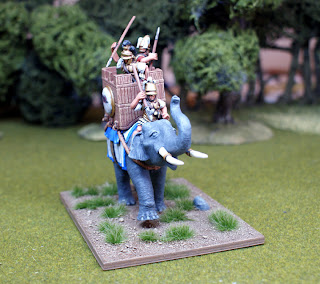 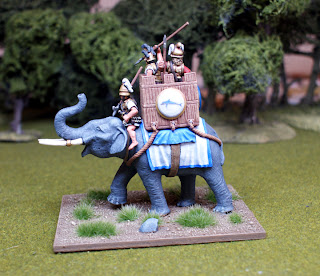 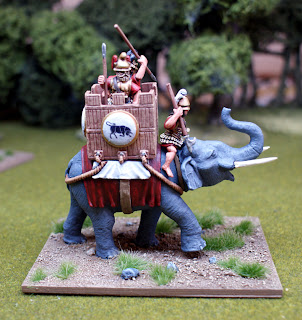 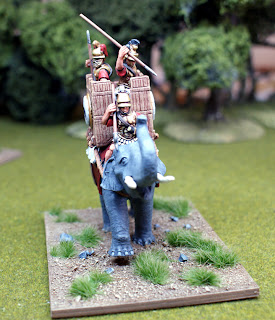 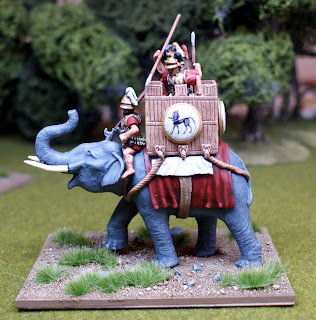 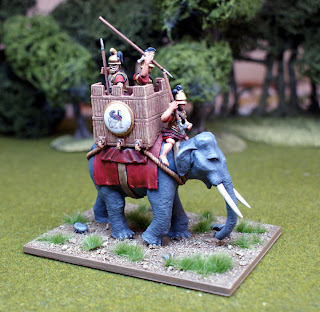 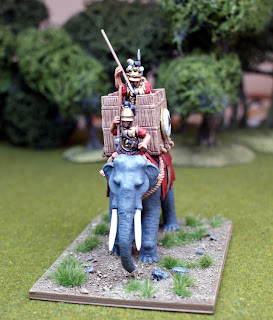 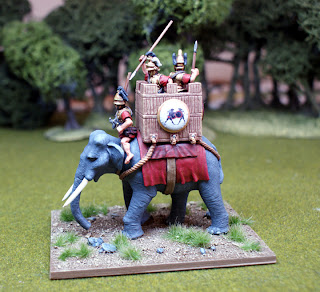 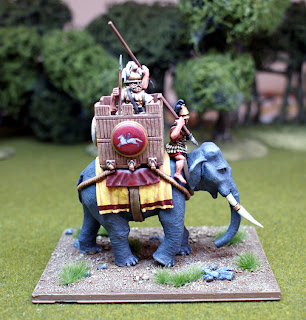 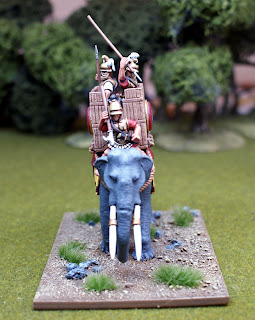 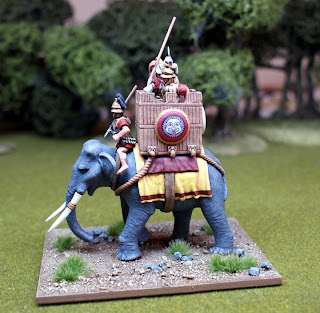 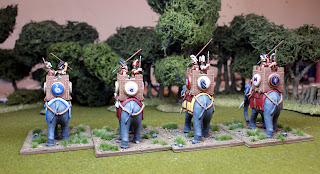 Its been a heavy month has March. Heres 4 of the reasons why! 4 beautiful beasts from aventine miniatures Pyrrhic range. They are all metal, none of that new fangled resin nonsense here (more rumbling on about resin in a future post!). these are a joy to paint and I hope I have done them justice. The Shields are LBMS the bases are Litko. These weigh in at 500gs each with base and they will soon be bulldozing through the opposition in Californ-i-a.
These arn't the only nellies I have painted recently, i will show a few more tomorrow.
Posted by Steve h at 00:39 4 comments: 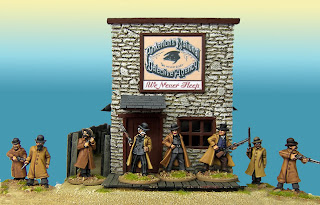 I was just going through some of my old pictures and I thought i would do a quick blog of one of my personal favourites.
My Pinkerton detective agency posse for Legends of the Old West, posing for a shot for the local newspaper outside their office. I've not played the game for quite some time but have many fond memories as well as lots of bat reps and pics on my other blog, so if wild west acton is your thing take a look at my old blog LINK
Posted by Steve h at 23:48 4 comments:

Nassau Volunteer Jagers up for grabs 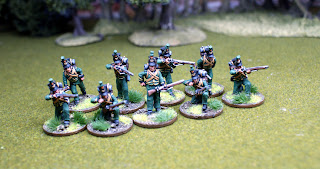 I have a few bits and pieces on Ebay at the mo, including these fine chaps of the Nassau Volunteer Jager company.
Get 'em while their hot!!
Ebay link
Posted by Steve h at 20:36 3 comments:

Here are the 4 units of 24 Celtiberians I started a few weeks back. I did do a photo of them all together but my camera couldnt handle it or most likely my skill with the camera is still lacking, as a few of these pics are a bit blurry..
Posted by Steve h at 23:37 8 comments: 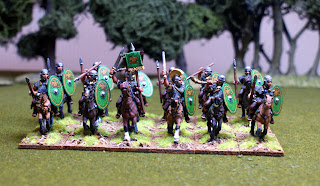 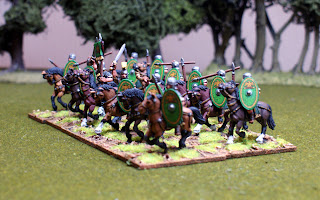 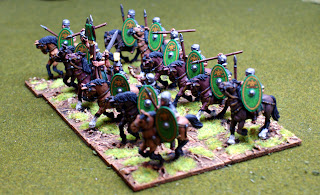 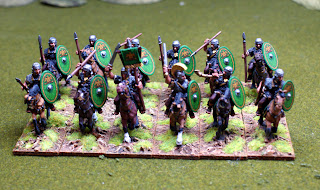 Heres a great unit of Roman auxillary cavalry, a real joy to paint. These Wargames Foundry figures maybe well over 15 years old but they certainly stand the test of time.
All hail the Perry twins!!!
the shields are the fantastic Little big men studio transfers.
Posted by Steve h at 19:28 6 comments:

WAR OF THE RING game

I played my first game of "War of the Ring" last Friday and I have to say it is a good fun game. Obviously having Daves great scenery and figures helps.
We played the Osgiliath scenario, where a massive evil horde led by Gothmog and a winged Nasgul attempt to take the ruins which are bravely defended by Faramir, Prince Imrahil and Gandalf the white. The first couple of turns the evil horde streamed across the er stream, whilst showering the defenders with very effective artillery fire which took out our bolt thrower and lots of archers hiding in the tower. A unit of orc scouts were found creeping through the ruins at the rear of the Gondorian army, Gandalf and his knights of Gondor charged and crushed them. Then a counter attack was lead by Prince Imrahil leading his knights of Dol Amroth, smashing into a huge mob of orcs and inflicting many casualties. The small unit of knights began to be swamped by sheer weight of numbers. So the brave? Prince decided to leave them to die and join a unit of spearmen preparing to defend against the Easterling warriors attempting to take the extreme left flank.
On the other flank my rangers began firing at a unit of warg riders, slaughtering them then turning their attention on another large unit of orcs. The rest of  the army tried taking out the trolls who are near enough unstoppable!
The winged Nasgul hit Gandalf with a black dart almost killing him. If it had of succeeded then there would of been little hope for the defenders, but luckily he survived and Dave/Gothmog decided that he had no chance of taking the field and elected to break out the whisky and lament his loss.

Players of the match have to go to the rangers who were extremely effective when they let loose a volley.
On the evil side it must go to the trolls who steam rolled up, taking anything thrown at them and kept on coming, just like England against France at Stade de France Paris yesterday!! 22-24 ooh yeah!
Posted by Steve h at 14:21 7 comments: