John brought his Napoleonic collection round last weekend and we had another game using General de Brigade rules. We only had four hours to get the game in so I thought it may be fun and save a little time if we did a hidden deployment using spare terrain tiles.
The scenario
The British were to take a village covering an important road, whilst the French were to hold it.

With this in mind we set to deploying our troops. I concentrated most of my (British) strength on my centre and left, expecting tough resistance in all the hedgerows and withing the buildings. On my right I deployed my cavalry in the open ground with orders to support the attack.
So imagine my surprise when the blinds were removed and most of the French was on my right flank and centre. John had just left one battalion in the buildings and another in the hedgerows.
Also there was another battalion deployed a little to close to my artillery (within canister range!!!) this was a slight anomaly from the use of hidden deployment.


The game opened with John using a tactical move to bring his Polish brigade into the centre whilst his cavalry came on a little to rapidly for my liking. I moved up my left brigade to start clearing the hedgerows whilst my 2nd brigade rapidly advanced towards the village, whilst rockets screamed over head crashing into a Veteran French battalion faltering it.

The next turn and John won the initiative (which he always seems to do ;0). He charged his 2 regiments of light cavalry into my heavy cavalry which managed to counter charge.
The end result was a win each. The chaussers soundly beating my dragoon guards and The Scots greys crushing the Hussars. The Scots greys then continued to pursue in an uncontrolled manner. which was a shame as a slight wheel to the left and i would of caught the Polish in line out in the open. 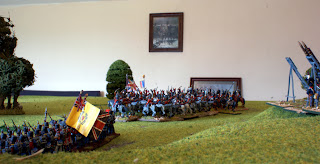 As the action became more intense I seem to of forgotten to use the camera. 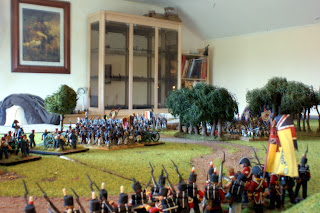 So there are no pictures as proof of the brave highland charge that routed the French from the village, at the same time the 22nd and 27th regiments of foot cleared the hedgerows on the right of the village of any resistance. 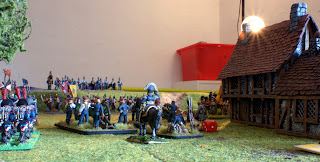 in the meantime the armies joined in the centre with the Poles being seen off by a devastating volley from the 66th.
With this a general retreat was made leaving the field to the British.
A great game was had, lasting around 3 hours with some furious action. We learned a few lessons regarding the rules. One, large battalions firing at effective range are pretty awesome! two, rolling double one with your artillery on the first turn is a real downer. We both did this, john with his 12lbs supporting the village and me with my most important battery on the hill over looking the village.

we also couldn't find how we go about the cavalry pursuit in the following turn. It wasn't until the evening as i was having a cool beer on the patio that I found it in the rule book right where i'd loooked around a dozen times that afternoon. You do another pursuit test.....    logical really.